Looking upon Miami's vast skyline, I have always wondered what this area must have looked like when it was first being settled. Those early pioneers landed on pristine shores. It must have been a tropical paradise. There is a place in Miami that you can visit to see exactly what life was like for the earliest pioneers.

The Barnacle is Miami's oldest home still in its original location. It was the home of Commodore Ralph Middleton Munroe, a yacht designer, avid amateur photographer, and one of Miami's pioneers. The home was built in 1891 on the shores of Biscayne Bay in Coconut Grove (just south of downtown Miami).

The Commodore's home sits on a tract of land with an entrance path on what is left of the original tropical hardwood hammock that surrounded it. The trail, cut by Munroe just wide enough for a horse-drawn buggy, leads up to the house and surrounding buildings. You leave the busy metropolis at the gate. When you progress down the paved path, the sounds of the city slowly fade away and you approach Old Florida.

Once the path clears the hammock, it opens onto a clearing with a carriage house (now the park office and gift shop) and the Barnacle itself, just beyond. The only hint of the modern cityscape is the neighboring townhouses that border the property and are visible beyond the estate's foliage on the main lawn. The home appears much the way Munroe left it. The path leads you to the rear of the home and continues around to the front.

Once you circle to the front of the Barnacle, the property slopes down a long lawn toward the shores of the bay. Then you will come to the Commodore's boathouse. When the home was built in 1891, Biscayne Bay was a common thoroughfare for Miamians and ships dotted the bay. The city of Miami was born in 1896, the same year the railroad reached Miami. 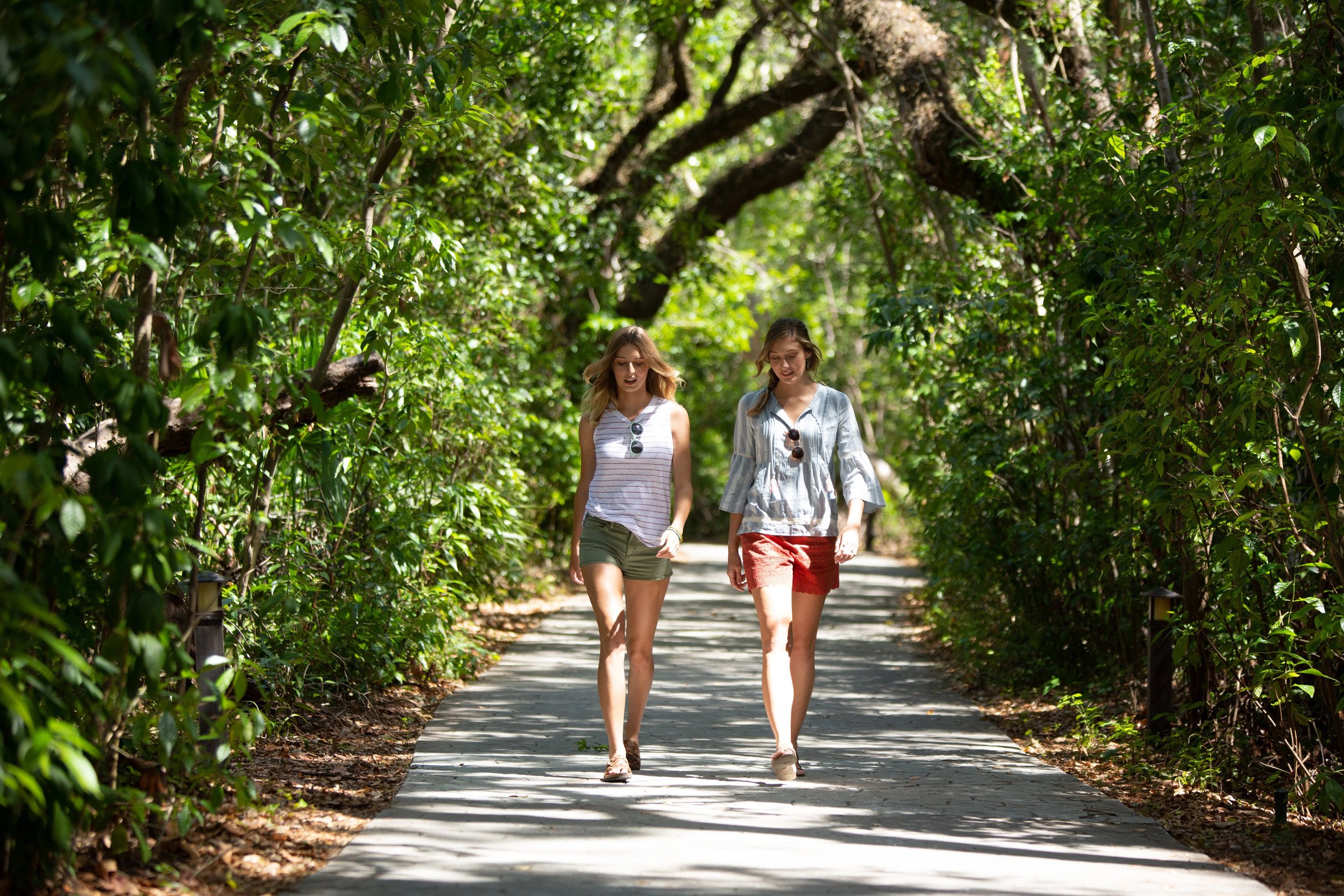 Photo courtesy of the GMCVB

The Barnacle and Boathouse

The Barnacle Historic State Park has several structures from Ralph Munroe's time: The Barnacle (1891), the boathouse (rebuilt in 1927), the carriage house/apartment (1927), the remains of the boat dock, Micco pavilion, a stone well, and the marine railway.

The Barnacle
Commodore Munroe learned much from traditional Caribbean home construction that was incorporated into the Barnacle. The Barnacle was first built as a single-story house with hipped-roof and set upon wooden pilings. Hipped roofs are far more stable during hurricanes than gabled roofs.

There is a large overhang to the roof forming large porches that keep the windows and walls in shade. The center of the house was open to the attic and the roof was fitted with a cupola that was operated with ropes and pullies to allow the hot air to rise and exit the house. The rising hot air pulled in air through the windows below and kept the home quite comfortable.

The house being elevated kept any storm surges from reaching the house and the flow of air under the bottom of the home kept the wood dry. The attic was used for storage and as a play area for the children.

When the need for more space for Munroe's growing family arose, the entire house was raised using train jacks and a new first floor was added below. The second story contained four bedrooms, a sitting room, closets, and bathrooms.

Today the house is decorated with Munroe family furnishings and personal items that were donated by Munroe's heirs when the house was sold to the State of Florida. Included in the home's decorations are some of the many photographs taken by Ralph Munroe. His photography contains many images that document early Miami in the Era of the Bay and pioneer days.

The Boathouse
The boathouse was the first structure Munroe built, in 1887. He lived on the 2nd floor and had his workshop on the ground floor. The devastating 1926 hurricane destroyed the original boathouse. It was rebuilt with two opposite walls that would give way during hurricanes and tidal surges. This allowed the flow of wind and water without the building being destroyed. The boathouse was also used as the original meeting place for the Biscayne Yacht Club.

The Micco Pavillion
The Micco was one of the Commodore's boats that was housed in the pavilion. Unfortunately, it was destroyed by a hurricane. It now serves as a space for events or anyone looking to escape the Florida sun.

The Carriage House
Built in 1927, the carriage house had an apartment on the upper floor. Today the building houses the parks office, storage, and the gift shop.

The Marine Railway
The railway was used to launch boats into the bay. A part of the railway is visible on land but the rest extends into the water. 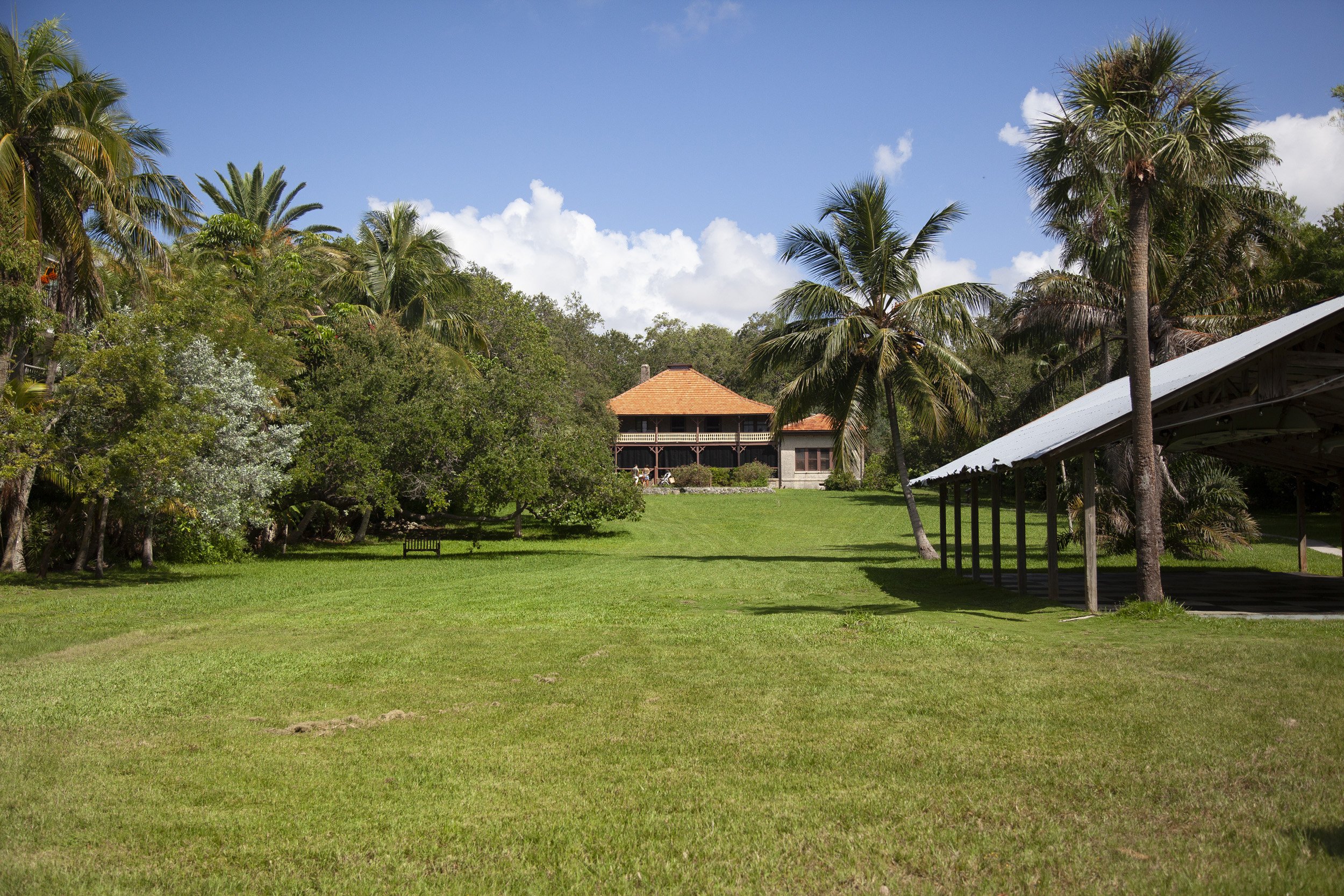 Looking back at the Barnacle from the boathouse. ©Picture Works Inc / Roldan Torres-Moure - Miami 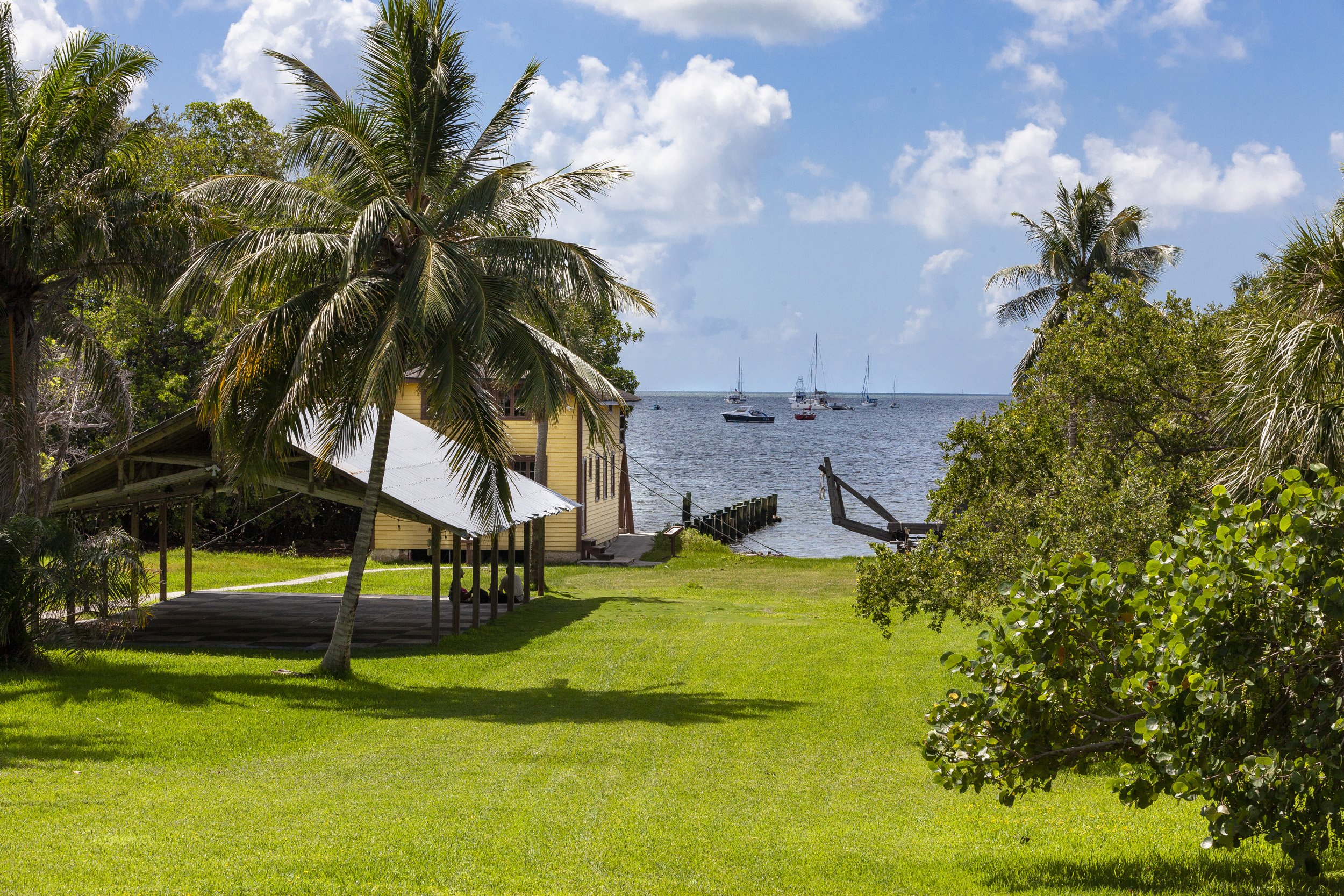 Facing the bay from the house and looking down at the boathouse. ©Picture Works Inc / Roldan Torres-Moure - Miami 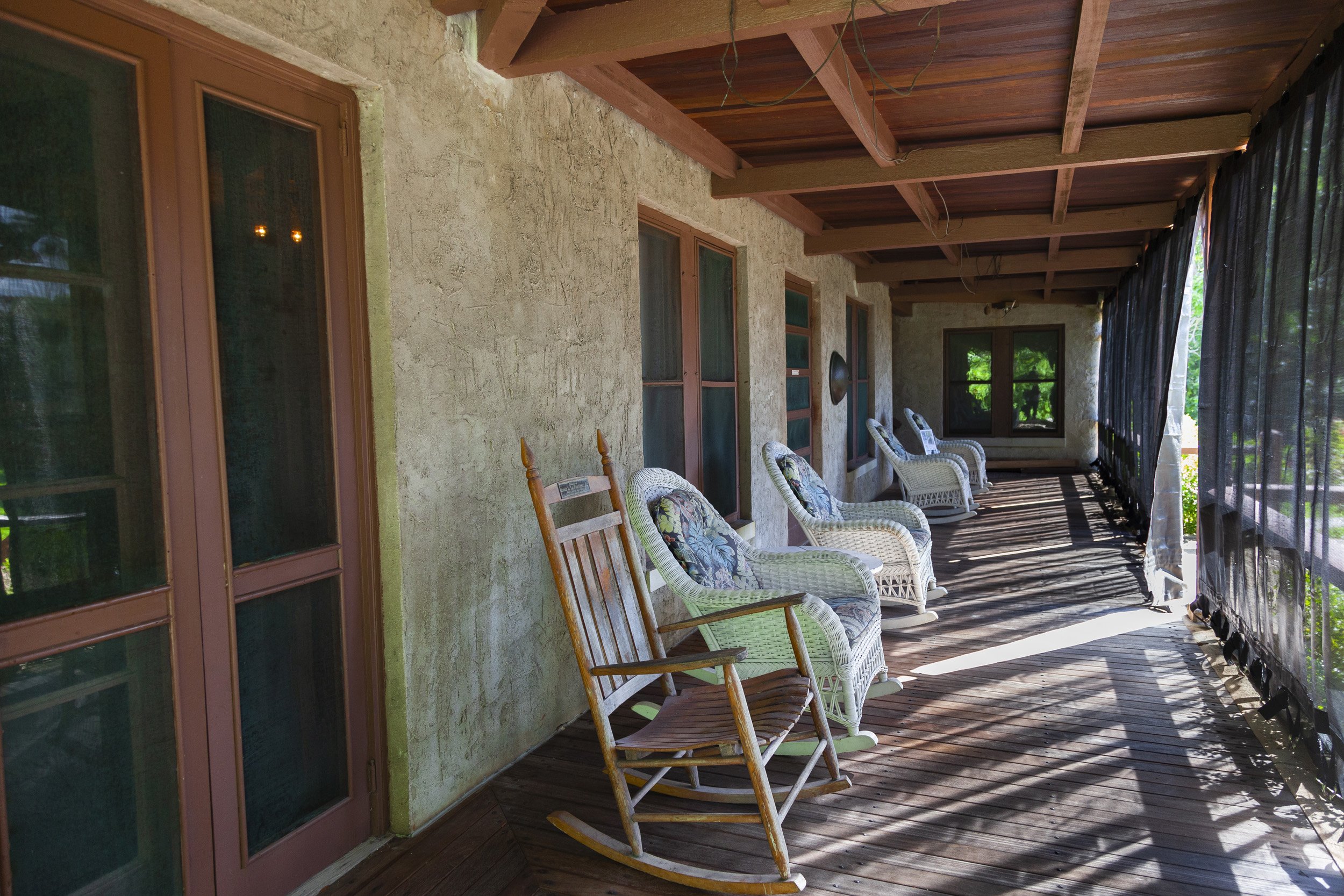 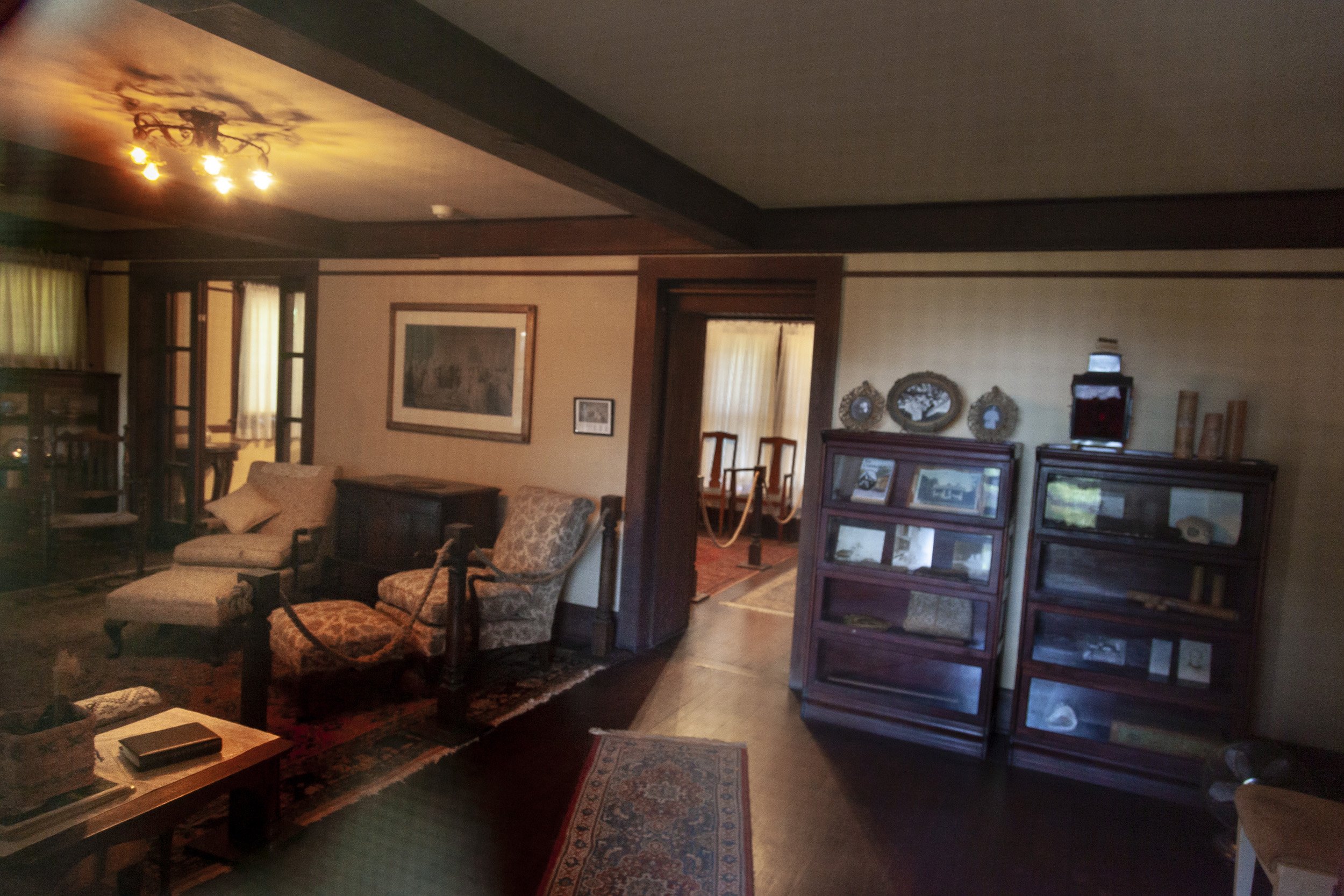 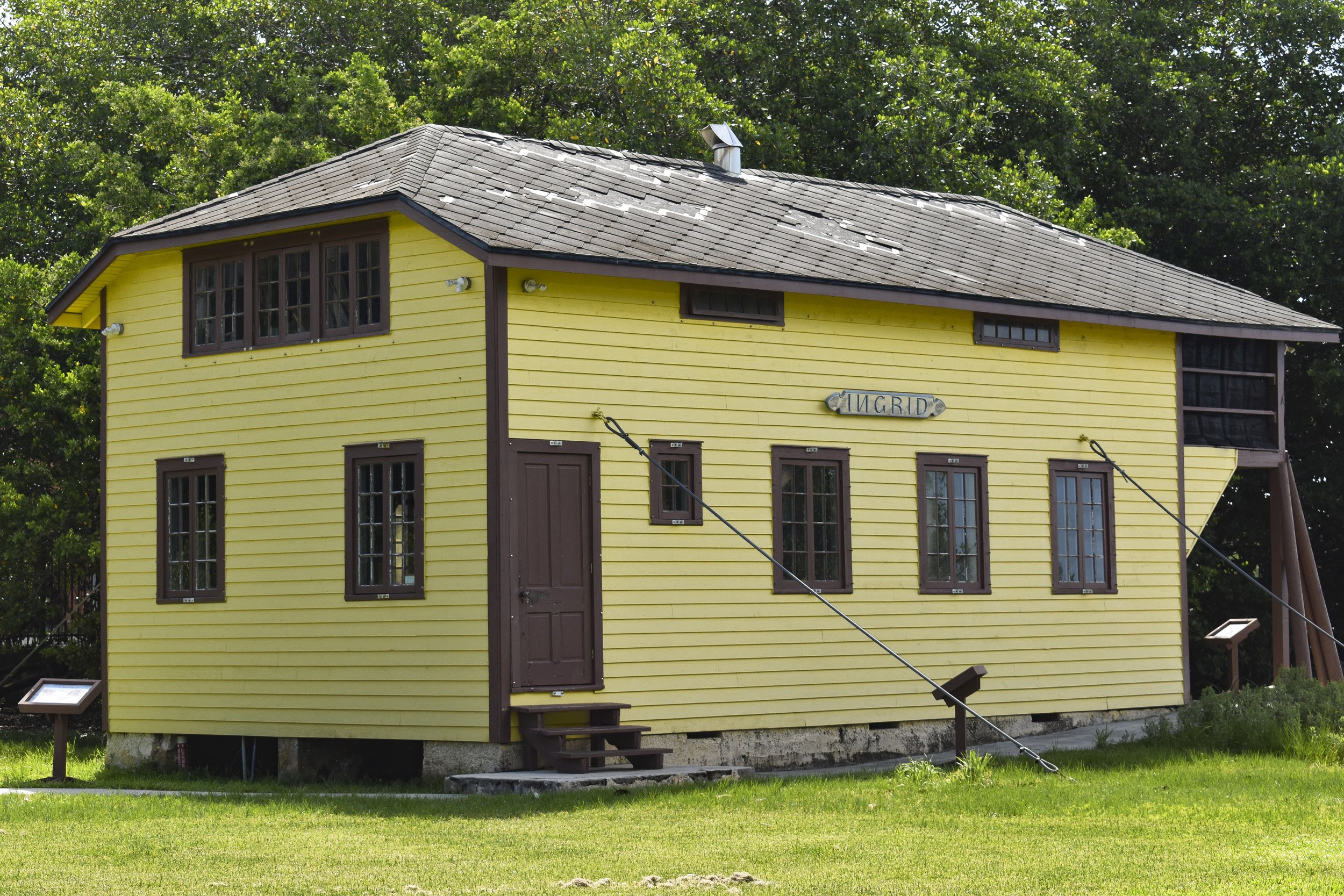 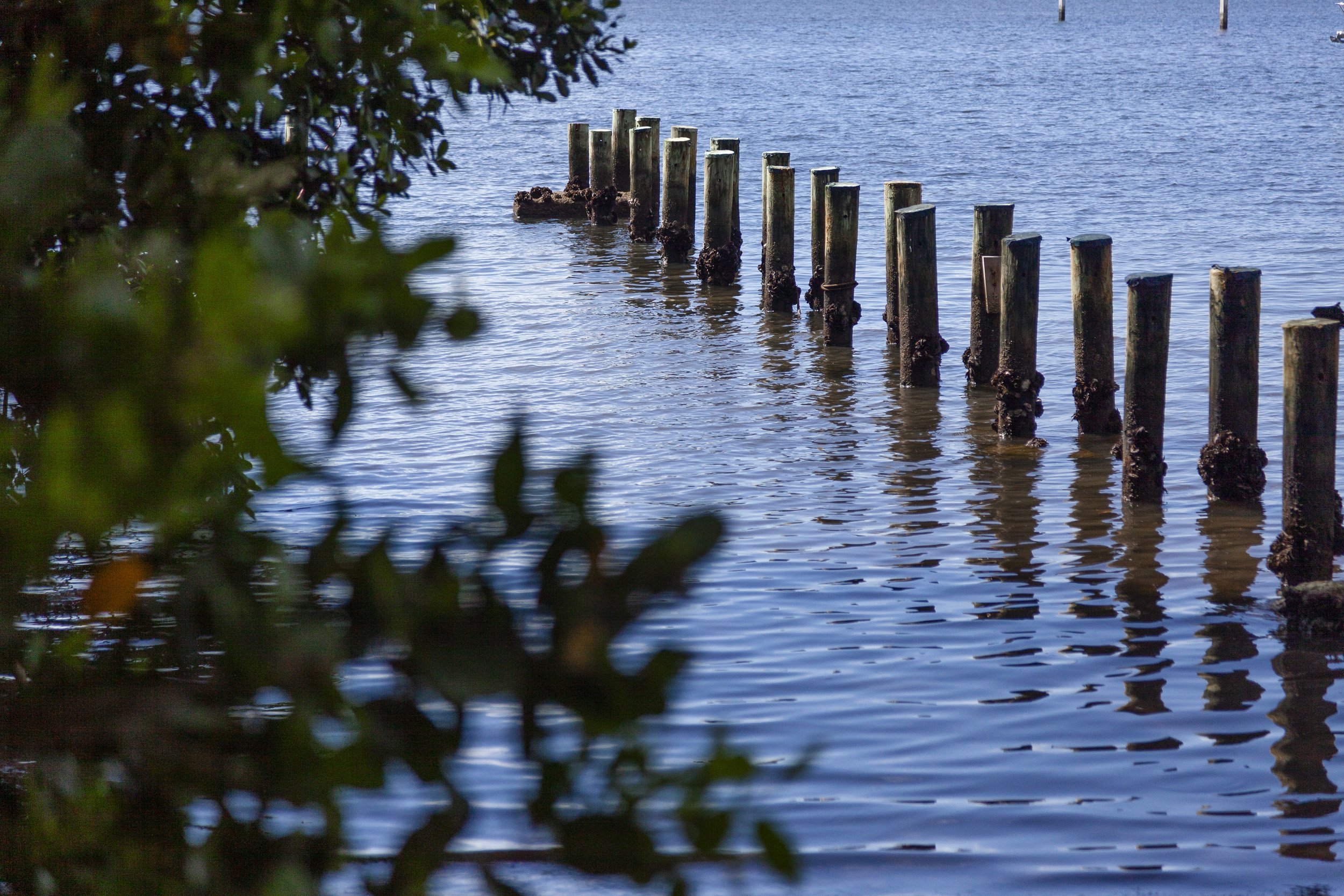 The remains of the old pier behind the boathouse. ©Picture Works Inc / Roldan Torres-Moure - Miami 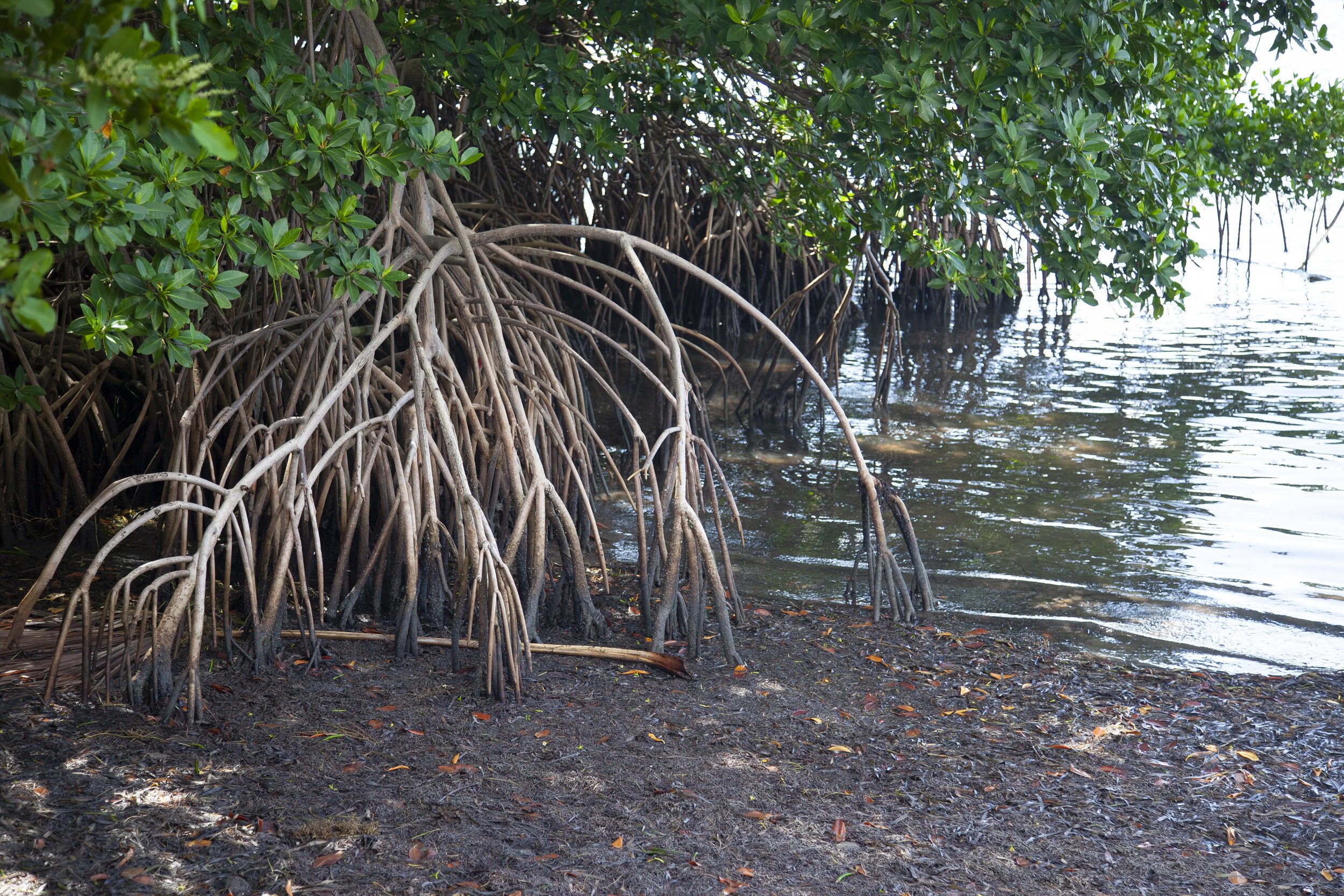 The 2.4-acre entrance hammock is what is left of the once vast Miami Hammock. The hammock and foliage surrounding the estate offer a large selection of native trees and wildlife. South Florida Slash Pine, Coconut Palm, Black Mangrove, Gumbo Limbo, Sugarberry, Cocoplum, Seagrape, and Florida Live Oak make a home here. The hammock canopy is contrasted by the more open lawn on the lower portion of the grounds.

The grounds and hammock are home to (or visited by) Great Blue Heron, Pelicans, Snowy Egret, White Ibis, Blue Jay, Cuban Green Anole, Orbweaver Spider, Grey Fox, Manatee, and Land Crabs. Some are easier to see than others as they come and go.

The Barnacle is built upon a formation known as the Miami Rock Ridge. The ridge is an ancient sedimentary limestone formation. The Barnacle is 18 feet above sea level on the rock ridge. The lower part of the grounds slope down until you reach the bay. The shoreline behind the boathouse is 60 feet long and is often visited by wading birds, manatees, horseshoe crabs, and various marine life.

The History of the Barnacle

TOURS OF THE BARNACLE AND BOATHOUSE
As of the writing of this post, the main house is closed for tours of the interior.

BARNACLE'S EVENTS
The Barnacle has many events throughout the year. Some of the most popular events are listed below. However, check directly with the park to verify which events are being held. You can visit the park's website HERE. More information is available from the Barnacle Society HERE. Or call the park's office at 305-442-6866.

For membership information click on the Barnacle's membership page HERE.

Driving Directions:  Click on "Directions" in the Map above (near the upper left-hand corner) or see below:
The Barnacle is located in Miami’s Coconut Grove.
From US-1, go south on SW 27th Avenue.
Turn right on Bayshore Drive. Bayshore becomes McFarlane.
Continue to Grand Avenue/Main Highway intersection.
Take a sharp left onto Main Highway.

Cost of Admission
The cost of admission is $2 and is on the honor system. There is a collection box on the entrance path.

Pets
Dogs are welcome in the park from 9 a.m. to 5 p.m. Pets must be well-behaved and must be kept on a handheld leash at all times that is six feet or shorter in length. Pet owners are required to pick up after their pets and properly dispose of their droppings. Pets are not permitted during after-hours special events.

Parking at the Barnacle Historic State Park
There is no parking inside the park. Street parking is available outside the entrance on Main Highway.

How Long Does It Take To See The Barnacle
Expect at least 1-2 hours to move through the house and gardens.

Remember: As always, it is advised that before you visit any location you should check weather forecasts, and contact the Barnacle Historic State Park directly to inquire about weather policies, closures or limited access, accessibility concerns, admission pricing changes, and other considerations. Visit the Barnacle's website or call (305-442-6866) directly for current information. Stay informed and get the most out of your visit!\